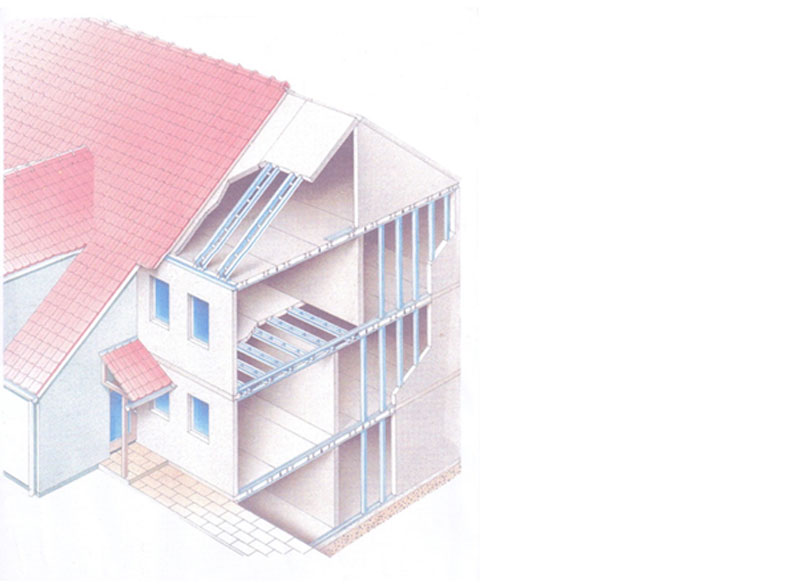 The CBS composite building system was developed by Mr. A. Imhoff. It was tested at various universities and it received:

The CBS System is an innovative, environmentally friendly building system which enables high constructional standards at minimal cost. Due to its high adaptability and compatibility, it can be used for a huge range of applications. The CBS System is especially suitable for the construction of houses and buildings with related requirements such as offices or schools. To ensure high quality standards, the CBS System has been licensed by the German institut for constructional engineering (Deutsches Institut für Bautechnik).

CBS houses are individually planned but industrially produced. From the planning stage until the keys are delivered, engineers provide the architect and civil engineer with technical support, thus eliminating any potential sources of error. The structure consists of wall-, ceiling- and roof elements, which are assembled with slot and key connections. These elements are calculated by CBS CAD software before they are fabricated.

In CBS elements a frame of thin, cold-formed steel provides the building with strength and increases the durabilty. These steel frames are built to resist the same pressure as conventional steel mats, but are substantially lighter. By using this technique, it is possible to separate the building’s static and the physical properties: There is no need for heavy walls; which don’t have good thermal values, because the building’s strength is provided by the steel embedded building elements. This enables the architect to focus on the aesthetic properties of the building instead of its dynamics.

We use cookies on our website to give you the most relevant experience by remembering your preferences and repeat visits. By clicking “Accept”, you consent to the use of ALL the cookies.
Cookie settingsAKZEPTIEREN
Manage consent